Is Your Thyroid Running Low?

Are you one of the many with a low-functioning thyroid gland? If so, it may be the reason for your body or mind not working as well as you might like. Although you will want to partner with a doctor to effectively evaluate your particular case, a basic understanding is a good place to start. 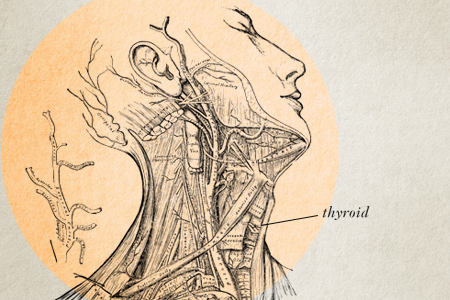 Virtually all of our living functions will either be sped up or slowed down by a higher or a lower level of thyroid activity.

The thyroid gland, located in the front of the neck, plays a central role in controlling body and mind function. The thyroid essentially determines how fast chemical activity will proceed, that is, how hard cells will work. Virtually all of our living functions will either be sped up or slowed down by either a higher or a lower level of thyroid activity.

Fortunately, blood testing is simple and reliable, and when performed and interpreted properly, we can determine what type of thyroid issue, if any, is needing to be addressed. In the past it has been fairly common practice in medicine to use one particular screening test, called TSH. In recent years, however, we have come to learn that thyroid function often deserves more careful testing in order to get accurate results.

Another issue is the interpretation of the test results. The normal ranges of thyroid tests are averages based on population studies, which is to say that not everyone functions optimally at the same level. When assessing thyroid function, as with virtually every other form of medical evaluation, it is essential to consider any piece of information as just one part of a complete clinical picture. A truly beneficial outcome of any treatment program depends upon the patient being seen as an individual, as there are almost always multiple factors that figure into the production of disturbing symptoms.

In recent years more and more people, both practitioners and patients alike, have come to be aware of a need for greater scrutiny in evaluating the thyroid. This has had two effects. One is, of course, more careful diagnosing and as a positive result, many people being helped by treatment of previously missed thyroid problems.

The other effect, however, is a tendency in some, again both practitioners and patients, to view other medical problems as low thyroid issues. This is not that surprising, given that certain common challenges, such as depression, fatigue, and weight gain, are among the symptoms of low thyroid function. Although beyond the scope of this article, there is a similar problem with the over-diagnosing of sex hormone deficiency, due to its being seen as the cause of problems that are actually of another origin.

Iodine is the most important nutrient for proper thyroid functioning, and it is commonly deficient in our diets. In some people with mild cases of low thyroid function, iodine supplementation is all that is needed. The treatment of more severe cases is usually accomplished easily using supplemental thyroid hormone, which comes in both synthetic and natural forms. Both are prescription items, so patients cannot cause themselves problems by inappropriate self-treatment. However, on the part of a practitioner, both testing and treatment can be an overzealous pursuit if other clinical possibilities are not considered.

One special version of low thyroid function results when the gland comes under attack from the immune system. This falls into the autoimmune category of illnesses, and in the case of the thyroid, it is known as Hashimoto’s Disease.

As with all autoimmune problems, there is something amiss with certain cells, in this case the thyroid cells, such that they have been identified by the immune system as foreign. Toxic and infectious agents that have contaminated those cells are the problem. So while thyroid hormone supplementation is often important for correcting a low level of function, the strategy to address the root of the disease involves cleansing out those agents that have evoked autoimmune inflammation.

The thyroid as symbol of expression

It may be of interest to note that the thyroid gland is located in close proximity to the larynx, or voice box. In some esoteric systems of thought, it is believed that the functioning of the thyroid gland has an association with our capacity for self-expression. In particular, the physical vibrations from vocalization may have an important influence upon the thyroid. Ancient practices of chanting would perhaps have scientifically valid health benefits by this mechanism. Yet even in the absence of those traditional beliefs and formal practices, it is no doubt a contribution to the balancing of our entire being when we practice using our voices and expressing our feelings in a productive way.

Be aware but not alone

This type of information is valuable for maintaining optimal health, and to many, the ways of body functioning are fascinating to learn about. After all, the mind-boggling complexity of our body chemistry is what creates the miracle of being alive. At the same time, we want to be careful not to be overly diagnosing and treating ourselves. General knowledge of health is good not only for staying healthy, but also for engaging in an enjoyable and productive relationship with your doctor. The thyroid, as a major player in maintaining optimal health, is one area to be certain to include.